A downloadable game for Windows

(6 races across 4 maps, 5 abilities, with more content coming every fortnight!)

Race against bots around two different maps. Use Spells cast from your wand to either boost yourself, or slow your opponents down, while dodging your opponents abilities. Choose from 3 different speeds and difficulty levels, and set your fastest time on each.

Free-flight is still available if you want to just cruise around, try sliding down a mountain, or try and catch a (copyright-free) Golden Orb.

Requires a HTV Vive or Oculus touch (if you have roomscale).

Launching from the itch App doesn't seam to load into the hmd everytime, if so just click on 'show local files' and click on BroomsticksVR.exe.

This is still an early version so expect bugs.

There's no music in the game yet, but I can highly recommend YouTube'ing your favorite soundtrack from a famous franchise that may or may not also have broomsticks in it and just fly around.

> Hold Down the trigger to move, hold it fully down to go faster. Steer by pointing the broomstick in another direction

>Trigger fires an ability, if you've picked up one. There are 5 options: Fireball (red), Boost (blue), Wall (green), Bomb (purple) and Hammer (orange).

Select a difficulty (beginner, intermediate, veteran) which will determine the speed of you and the bots. Then select a race, which will auto start. Alternatively just pick 'free-flight' if you just want to fly around and explore the maps. This is very similar to previous demo versions of this game if you've played them.

Each power-up gives 3 charges of an ability.

Fireball shoots a fireball, unsurprisingly, forward out of the wand, which will home slightly towards other players. On hit, it stops movement for 2 seconds.

Boost sends you or your opponents forwards rapidly, in the direction your broom is pointing.

Wall spawns a glowing green orb that will spawn a destructible wall after 1.5 seconds. this will slow opponents behind you down if they crash into it, or swerve to avoid it.

Bomb fires a purple orb that explodes after 1.5 seconds, or on hit. it will knock you or your opponents out the way.

Hammer transforms your wand into a giant, over-sized hammer. Good for hitting people out the way with.

I'm very happy with the way this game is shaping up, most of the systems (for map creation, obstacles, Pick-ups etc) are all in place which means I can focus on adding maps and content now. Yes, I am planning on adding multiplayer at some later stage, but that is quite a big jump. If you've got any idea's or suggestions for new gamemodes, abilities or obstacles I'd love to hear them!!

Thank you for playing!

Any Support is greatly appreciated!!

Will there be a Version for Quest??

can I pay the extended version in another way?

Can this be play on a windows mixed reality?

Can you provide me the source code of it? At any charge?

Can you provide a unity source code?

Great Concept! Very fun! I hope this hasn't been abandoned. . .

Will not work for me, either through itch.io or by running .exe file. Running Oculus Rift on Win 10, 16MG DDR4, 8GB video card. My kiddo would love to play this! Thanks!

I went into this thing with some skepticism, but its one of the best VR games on itch.io I've seen! Incredibly fun! My only complaint would be it'd be nice if there was a way to tell what ability you had in your wand, but other than that a really nice experience! I didn't even get motion sick, which really surprised me

I haven't had such a big smile on my face for a long time, I looked like an idiot at home, but a childhood dream from 15 years ago that I doomed impossible kind of became true. I kind of miss doing sick stunts that make me wanna puke, so I hope for maybe a seperate broom with different controls that make me be able to roll and flip. Other than that, fantastic concept so far, I can't wait for more, your game is definetely one of the coolest on the Vive so far and I can't wait until my 45 year old mom comes over, she's a big HP fan and never had a vive, but I think this'll blow her mind.

I have to say, there is not much content yet, only a couple races and free flight, but I spent a good hour on it and i'll play some more later down the line. For 5 bucks it's definetely worth the experience already.

I'd like to play this while kneeling for more immersion. Is there a way to recentre my position?

The races are designed so it shouldn't really matter what height in your place space you are, so can't you just kneel anyway? 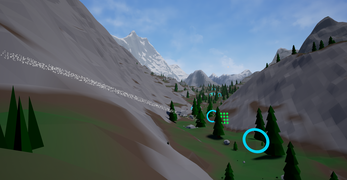 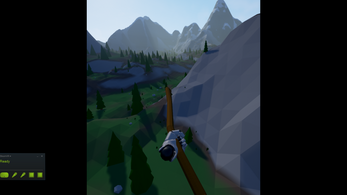